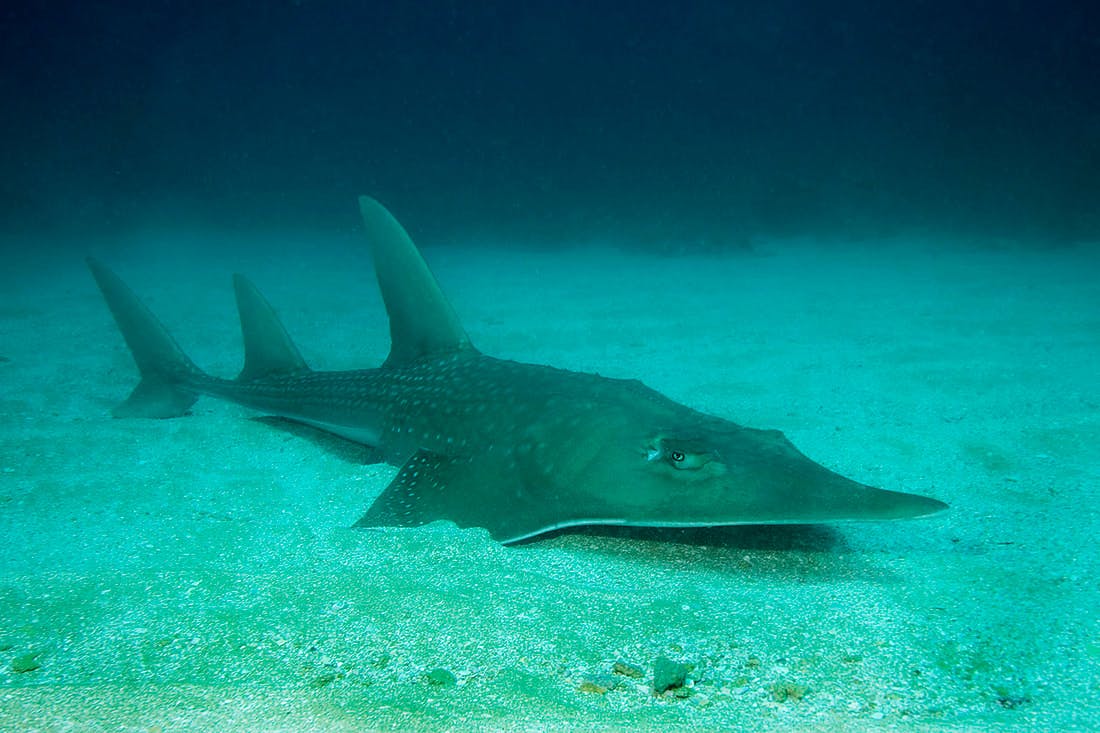 A special group of rays are now officially the world’s most threatened marine fish. The trade in their fins could be regulated for the first time next month

Most people will have never heard of the giant guitarfish and the wedgefish, collectively called Rhino Rays. They don’t often hit the headlines compared to their shark cousins and they’ve even been below the radar for most conservationists. But they are now the world’s most threatened marine fish.

The fins of Rhino Rays are highly prized for shark fin soup and are fished in much of the world’s warm, coastal waters around Africa, the Red Sea, the Indian Coast and the Indo-Malay Archipelago. Like many other rays and sharks, they have relatively low reproductive rates that leave them especially susceptible to overfishing.

New Red List assessments of endangered species released July 18th by the International Union for the Conservation of Nature (IUCN) classify all but one of the 16 warm-water, shark-like ray species as Critically Endangered. This is one level below extinct in the wild. Declines of more than 80% over the past 30 to 45 years, due primarily to overfishing, have led the IUCN’s Shark Specialist Group (SSG) to this conclusion, and it is not the first alarm bell to ring for shark and ray species this year.

On March 20th, the SSG announced that it had upgraded the threat level for the better known Shortfin and Longfin Mako sharks as endangered. Both species were previously classified as Vulnerable, a lower level of extinction risk.

The Shortfin Mako, most famous for being the fastest fish in the ocean, has suffered a 90% decline in the Atlantic over about 75 years. Makos are slow to reproduce and are valued in many countries for both meat and fins; however, up until now, like the Rhino Rays, the ‘products’ for which they are sought have not been subject to any international trade regulation.

This could all be about to change. Next month in Geneva sees the 18th meeting of the Conference of the Parties (CoP18) to the Convention on International Trade in Endangered Species of Wild Fauna and Flora (CITES). Three proposals that together would list Shortfin and Longfin Mako sharks, 10 species of wedgefish, and six species of giant guitarfish on Appendix II of CITES have drawn a record-breaking number of co-sponsors, in all, 67 governments co-sponsored one or more listing proposals.

If successful, the listings would obligate 183 Parties to regulate exports to ensure that international trade in the species is legal and sustainable.

By adopting listings to require countries to demonstrate that their exports of products from listed species have not harmed wild populations or ecosystems and encouraging countries to pass regulations to manage these species, CITES has become a driving force in global shark conservation and management. The increase in focus on sharks and rays within the agreement since 2013, when the first commercially important species were listed, is testament to the work of many governments, policy-makers and conservationists in pushing the need for better protections slowly up the political agenda.

The new assessments by the IUCN today paint a stark warning – we are on the precipice of losing these unique species forever. By the time they are assessed again in 10 years, if trends continue, many could be extinct in the wild and lost to us all. We can help avert the dire predicament they face if countries act at CITES next month. All eyes are on CoP 18.

The Shark Conservation Fund (SCF) has played a pivotal role in work to protect sharks and rays globally. With an estimated 100 million sharks killed every year and nearly a quarter of all shark and ray species facing extinction, their declining numbers are a growing threat to the health of the ocean and jeopardize the livelihoods and food security of millions of people around the world.