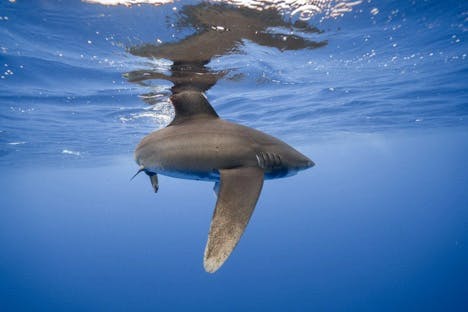 Beginning June 25, OceanX, the Cape Eleuthera Institute (CEI), Florida International University (FIU), Microwave Telemetry and the Haiti Ocean Project (HOP) launched a new research and media mission to study bluntnose sixgill sharks and oceanic whitetip sharks in Caribbean waters. The mission will connect critical data on sharks from the Bahamas to a wider effort in the Caribbean to protect the ocean’s apex predators throughout their lifecycle.

“We’re excited to partner with the local scientists and conservation groups in the Caribbean working to protect endangered shark species and support their efforts with our exploration and research capabilities,” said Vincent Pieribone, Vice Chairman, OceanX. “Our mission will focus on researching the behavior patterns of the bluntnose six gill and oceanic whitetip sharks and help secure critical data that will enable us to better understand these sharks and implement the protections necessary to ensure their survival and repopulation.”

“As the climate crisis continues, it is critical that we have a strong understanding of ocean systems,” said Antha Williams, Head of Environmental Programs at Bloomberg Philanthropies. “This latest mission with OceanX is providing data needed to develop science-based conservation strategies. This is important not only to help protect endangered sharks, but to ensure that key ocean ecosystems – and the people dependent on them around the world – can survive and thrive despite growing threats.”

Recognizing the tremendous asset of these apex predators to the tourism industry, which contributes roughly $114 million USD to its economy, the Bahamas banned commercial longlining in 1993 and subsequently the commercial trade of sharks throughout all 630,000 square kilometers of Bahamian waters in 2011. Establishing this Bahamian Shark Sanctuary was a conservation milestone that firmly positioned the Bahamas as a world leader in shark conservation, research and tourism.

Two sharks that have benefitted from these forward-thinking policies are the bluntnose sixgill and oceanic whitetip.

The bluntnose sixgill, a large, deep sea predator, has yet to be properly studied in its natural habitat, often being accidentally captured and pulled to the surface where its behavior patterns are altered post-captivity. Once captured, bluntnose sixgills are often killed under the assumption they will not survive if released back into the ocean.

Utilizing OceanX’s deep-sea submersibles, scientists will travel hundreds of meters into Caribbean waters and attempt to attach a satellite tag to the bluntnose sixgill at depth for the first time ever. The tagging will allow scientists to study the movement patterns and natural behavior of this shark species and shed light on the impact of accidental capture on its lifecycle. Documenting these effects will be critical in encouraging the live release of bluntnose sixgills from commercial fisheries.

The oceanic whitetip (OWT), while abundant in Caribbean waters, is in massive decline globally, listed as “critically endangered” in the western Atlantic. An iconic and pelagic (open water) shark with a storied history and photogenic presence, lawmakers are only now starting to take action to protect these enigmatic fish on the global stage.

Based in part on data gathered over almost ten years by a group of researchers at the southern tip of Cat Island, where adult oceanic whitetips congregate in numbers reminiscent of their past abundance, this species was recently added to Appendix II of the Convention on International Trade of Endangered Species, an act that enforces the trade and commercial capture of these sharks around the world, as well as to the Endangered Species List in the United States. A recovery plan for these sharks was initiated in 2018, with much information still missing that is critical to the conservation of the species – even in the Bahamas.

"Despite the fact that the Bahamas is a shark sanctuary, there is still a lot that we don't know,” said Eric Carey, Executive Director at the Bahamas National Trust. “Globally, their populations continue to decline and are under severe fishing pressure. We believe there are more questions to be answered."

For nearly a decade, researchers from CEI, Microwave Telemetry, FIU, WCS, University of North Florida, New England Aquarium, and The Moore Bahamas Foundation have deployed more than 90 pop-up archival satellite tags on OWTs here. These tags record depth, temperature and location for up to one year, at which time they self-detach from the shark and report their data to orbiting satellites.

The scientists have also collected samples and conducted ultrasounds of female sharks to identify pregnancies. Satellite tracks of pregnant sharks have revealed a hotspot of activity in the Windward Passage, a straight between Haiti and Cuba that connects the Atlantic Ocean and Caribbean Sea.

“When we started this project, we had no idea that it could amass such a body of data, and become this example of excellent research collaboration,” said Lucy Howey, scientist and manager at Microwave Telemetry, and veteran member of the Bahamas Cat Island expeditions. “Even still, one major question has remained unanswered: where do oceanic whitetips give birth in the western Atlantic?”

Now, on the Alucia, the international team of scientists will follow oceanic whitetip mothers to an area where they may give birth and where pups might spend the first few years of their lives. Confirming these pupping grounds is a first step towards promoting the recovery of this species.

“After years of research on adults in the southern Bahamas, we now have a unique opportunity to follow pregnant mothers to the Windward Passage, a place where they may give birth to the next generation—the future of this population,” said Edd Brooks, Executive Officer of Cape Eleuthera’s Island School. “Studying these juveniles may provide insights that directly inform the conservation of the species."

“Sharks are legally protected in the waters of the Bahamas, but that alone won’t safeguard the survival of severely depleted, and highly migratory species such as oceanic whitetip sharks as they leave these safe waters to feed, grow and reproduce,” says Luke Warwick, Associate Director, Sharks and Rays Program, Wildlife Conservation Society, a partnering organization. “This project works with local groups and fishers on the ground in Haiti once the initial research is complete, to use that science to reduce the number of juvenile sharks being killed in fisheries, an approach WCS uses to protect sharks and rays globally.”

International efforts will be required to conserve the OWT across every life stage. The Bahamas provides the starting point for expedition—and an example of policy— that can pave the way for shark conservation in the wider Atlantic and Caribbean.

“OceanX has provided us with a unique opportunity to build upon years of research and drive conservation outcomes,” said Trevor Bacon, Marine Program Manager, The Moore Bahamas Foundation. “We hope to fill in a critical piece of the puzzle in the effort to protect one of the oceans most threatened and iconic species; once one of the most abundant shark species. The key will be increasing official and local community support for improved education, effective protection and sustainable management.”