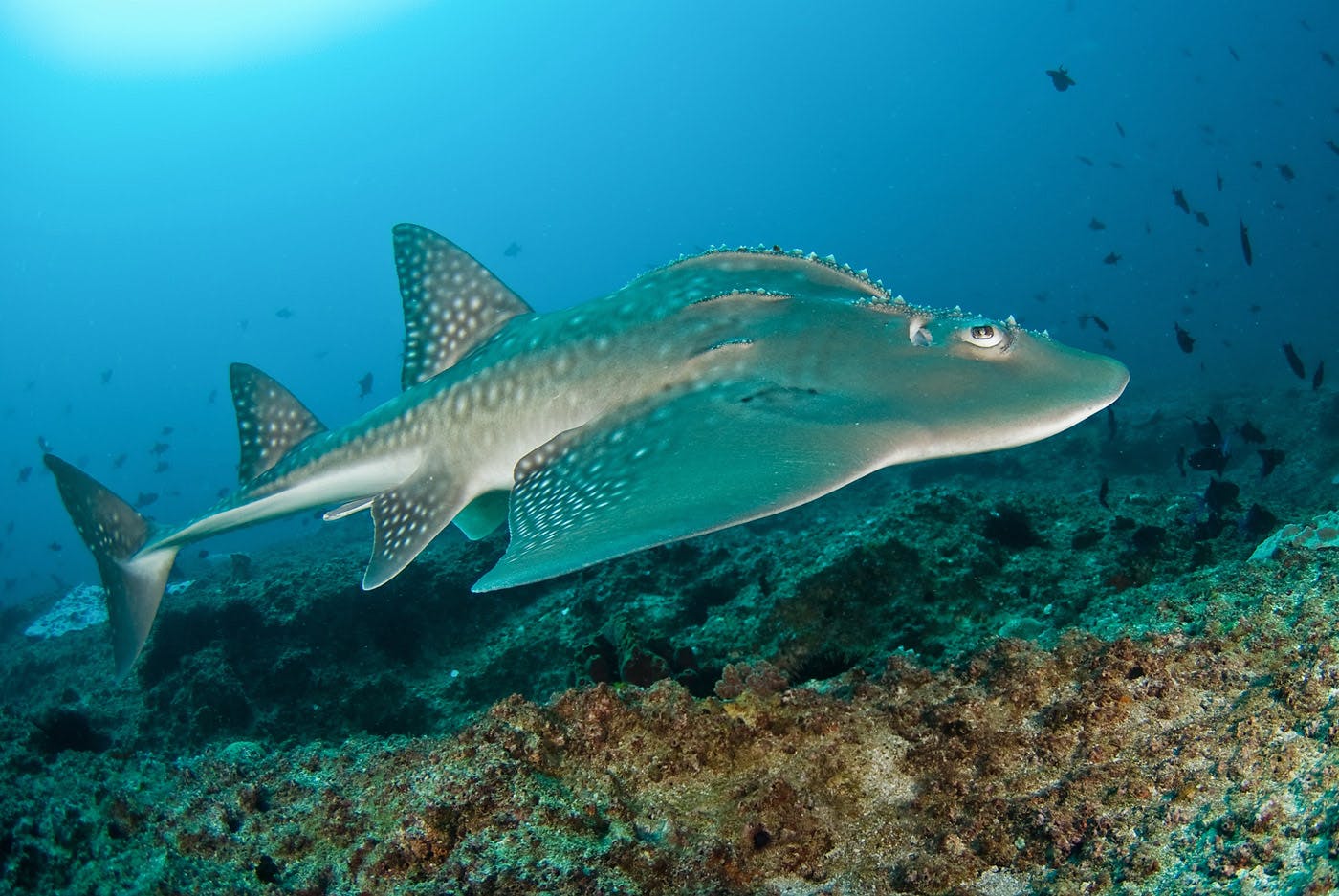 Record-breaking protection listings have been adopted for sharks and rays. Now it’s time to implement

Some of the world’s most endangered sharks and rays have been handed a lifeline by the international community after a historic decision in Geneva.

At the end of August, delegates at the triennial meeting of the Convention on International Trade in Endangered Species of Wild Fauna and Flora (CITES) voted to list 18 species on Appendix II, which obliges countries to prove that trade in them is legal, sustainable, and does not harm wild populations. If properly implemented, the decision could pull makos, wedgefish and guitarfish back from the brink.

It was almost too late. Long- and shortfin makos – the fastest sharks in the sea, hunted for their fins and meat – had their IUCN threat level upgraded from Vulnerable to Endangered in March this year, following relentless pressure from unmanaged commercial fisheries that have reduced the global mako populations by an estimated 50 to 79%.

Meanwhile, the IUCN left no doubt about the threat facing the lesser-known families of wedgefish and giant guitarfish (sometimes grouped together as ‘rhino rays’), which have been heavily targeted for their fins to the point where they’ve become the most endangered marine fish in the world. In July the IUCN’s Shark Specialist Group announced that 15 of the 16 known species are now Critically Endangered, a classification only one level below extinct in the wild.

The critical votes came after years of intense research work and advocacy from a broad coalition of NGOs and scientists, supported by the Shark Conservation Fund. CITES signatories have historically been reluctant to list any commercially valuable marine species, so it was clear that an exceptional effort would be needed to persuade at least two-thirds of them to get behind the proposals. In the end, though, a record number of countries added their name as co-sponsors of the proposals, and this momentum helped ensure the needed votes, with nearly 72% of the governments at the meeting voting to list the makos and more than 78% supporting the inclusion of wedgefish and guitarfish.

Strong leadership from key shark champion governments
None of this would have been possible without strong leadership from shark champion governments, with all three proposals receiving robust support from west African countries, the Middle East and South and Central America; with Mexico acting as the lead champion for the makos, Senegal the guitarfish, and Sri Lanka the wedgefish. They along with more that 50 co-sponsoring governments provided strong and loud voice in Geneva in favour of the role that CITES can play in conserving the world’s sharks and rays.

Japan led the opposition to the move, supported by some 40 of the 183 CITES signatories. But their argument against protection for the threatened species – that there isn’t enough scientific evidence to show conclusively that fishing is responsible for the precipitous declines in their population numbers – didn’t convince the global majority.

What needs to happen now
CITES is an international conservation treaty that is taken seriously by its signatories, because they face serious sanctions if they fail to implement its measures. Non- implementation can result in suspension of all trade in any listed species of flora or fauna, deriving from that country.

The real challenge now is to ensure the listings are swiftly and effectively implemented worldwide. Since regularly traded sharks were first listed on CITES Appendix II in 2013, global shark conservation action has significantly increased. Countries have undertaken Non-Detriment Findings (NDFs) with some showing it’s possible to continue international trade with conditions, while others have put in place domestic management measures that include: prohibiting exports, prohibiting catch, and establishing shark sanctuaries which prohibit all catch and trade of sharks in their waters. For example, NDFs were developed in Sri Lanka, Malaysia, Mexico, Indonesia, Australia, USA, Peru, Colombia, New Zealand, export or catch of CITES listed species has been prohibited in Cape Verde, Philippines, India, Pakistan, United Arab Emirates, Indonesia and shark sanctuaries prohibiting catch and trade of all sharks within their exclusive economic zones have been established in Samoa and the Dominican Republic.

For makos, regional fisheries management bodies are key
Since makos are a key secondary target in many high seas tuna and swordfish fisheries, Regional Fisheries Management Organisations (RFMOs) must take a leading role in ensuring the new protections are implemented and enforced. Among these, the International Commission for the Conservation of Atlantic Tunas (ICCAT) has a particular responsibility to ensure effective action is taken, having argued against listing the mako on the basis that it, rather than CITES, is the most appropriate body to manage conservation of the species. We expect ICCAT to show it means business by imposing a retention ban for the northern population of mako, as recommended by its scientific advisors, at its next meeting in November. A precautionary approach is particularly important for the pelagic, globally-distributed mako, so other RFMOs need to act to prevent a repeat of the plight of north Atlantic mako.

Guitarfish and wedgefish – regional focus with SCF support
As for guitarfish and wedgefish, implementing the listings will mean a focus on several regions including East Africa, Southeast Asia, the Northwestern Indian Ocean and the Arabian Sea. Many of the countries concerned have limited resources and capability, so here at the Shark Conservation Fund we’re providing critical funding for CITES implementation in Sri Lanka, Bangladesh, Indonesia and Senegal. Given their Critically Endangered status, in many cases these are species that will already need full protections, to allow populations to recover to levels where future sustainable trade might be possible.

The tools available have improved considerably in recent years, thanks to advances in trade data collection technology and a better understanding of fisheries management.

SCF supports much ongoing evidence-based research on all three newly-listed groups as well as many other species, and we’re using our convening power too: we’re bringing people together, working with local governments and communities, fisheries managers, fishers and others to promote engagement with CITES implementation. If the global community is truly serious about saving these and all the world’s commercially caught and traded sharks, everyone involved needs to be on board.

The fight goes on to protect sharks and rays
Of course, the battle to solve the global shark and ray crisis is very far from being won – more than 100 million are still killed every year, and according to the IUCN 30% of all species are threatened with extinction. Nevertheless, this latest news from CITES shows that change is possible, and it could mark a turning point in long-term efforts to protect and restore shark and ray populations worldwide.

CITES protection for makos, guitarfish and wedgefish is a victory to celebrate – but it’s one which should also spur the shark and ray conservation community to even greater efforts. Our work goes on.